You are here: Home / About the Camp / History / The Ellsworth Eagle

Appearing in our Camp July/Aug. 1997 “Guidon” Newsletter
Dear Brothers,
As you have probably heard, the eagle was stolen from the monument of Col. Elmer Ellsworth, in the Mechanicville Cemetery. Thanks to some pictures taken by Bro. Steve Davis, at our 1996 Memorial Service, Camp #154 has been able to provide authorities a picture of the eagle that was stolen. PCC Halpin and myself have been working with police. I have sent copies of the picture to the Civil War News for publication, and Bro. Halpin has contacted the Ellsworth Ice Cream Co. about heading up a reward program. We have in the works other avenues of contact through television and antique organizations to try to locate the eagle… Bill Rave, Camp Commander

Appearing in our Sept./Oct. 1997 Newsletter, Minutes of August 7th, 1997 Meeting
An article on the stolen Ellsworth eagle appeared in the Civil War News thanks to the efforts of Bro. Halpin and Commander Rave, Bro. Halpin has been trying to generate interest in the Ellsworth family business regarding posting a reward. At the suggestion of the *Camp Commander, the Camp Sec./Treas. volunteered to search the Internet for sites relating to stolen antiques.
(so far most of the services that have been located, charge a fee to post a missing piece)…
Daniel Cole, Secretary/Treasurer; *At this point the suggestion is made to place a notice on the Internet, alerting folks in the trade,
to the missing eagle…

Appearing in our Jan./Feb. 1998 Newsletter,Minutes of October 2nd, 1997 Meeting
Regarding the Ellsworth monument eagle theft there have been a couple of articles in the papers recently regarding local VFW chapters restoration drive …The idea was put forth that we might be able to get the police to help us with a list of local businesses to donate reward money. The Commander suggested that the best thing we can do at this point is to photograph monuments for visual records,
in case of future thefts. 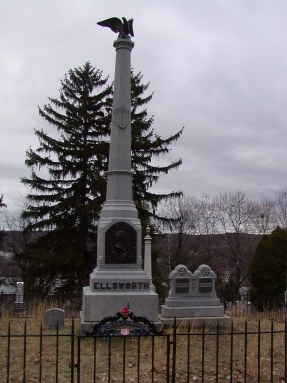 …At some point early in 1997 the large bronze eagle was stolen from the top of the grave site monument to Col. Elmer Ellsworth in Mechanicville NY…. Col. Ellsworth was a personal friend of President Lincoln, and was the first Union officer killed in the Civil War,
while removing a confederate flag from a hotel rooftop in Alexandria VA, the hotel and its flag were in eyesight of Lincoln’s White House.
If you have any information call: Daniel T. Cole or write:
Sec/Treas., Sons Of Union Veterans Of The Civil War, Camp #154,
…In a matter of days The Atlantic Auction Gallery of Sagamore Mass. saw the posting, and realized they had the Eagle in their hands…the authorities were contacted, and one week later the news was out, and the Eagle was returned to Mechanicville.
Special thanks goes to Brother William Halpin who put a lot of time and legwork into dealing with the Mechanicville Police,
and to Brother Stephen Davis who was able to supply the Camp and the police with the photograph that caught the antique dealers attention…Thanks to all involved!

Appearing in our March./April 1998
Newsletter, Minutes of January 17th, 1998 Meeting
Bro. Halpin gave a committee report on the recent location and return of the Ellsworth Eagle.
A motion was made and passed to send each of the two dealers involved, a framed certificate and letter of thanks, for their help.
Bro. Halpin expressed hope of setting up a photo opportunity with the Eagle sometime in February.

Press Release Sent to Civil War News,
and SUVCW National and NY Dept.Newsletters, April 1998
At some point in early spring, 1997 this large brass eagle was stolen from atop the grave site monument to Col. Elmer Ellsworth in Mechanicville NY. Col. Ellsworth was a personal friend of President Lincoln… and was killed while removing a confederate flag from a hotel rooftop in Alexandria VA, the hotel and its flag were in eyesight of Lincoln’s White House,
Ellsworth became an instant hero and martyr to the Union cause.
On December 13th, 1997 a notice with photo, was posted on the Internet by The Col. George L.Willard Camp #154 of The Sons Of Union Veterans Of The Civil War, hoping someone would recognize the eagle… in a matter of days an antique dealer in Massachusetts spotted the posting, and knew he had the eagle… the authorities were contacted, and one week later the eagle was home.

Special thanks goes to Bro. William Halpin who put a lot of time and legwork into dealing with the Mechanicville Police, Bro. Stephen Davis who was able to supply the Camp and the police with the photograph,
Bro. Daniel Cole who scanned the photo and posted the information on the Website,
and to Commander William Rave who directed the effort.