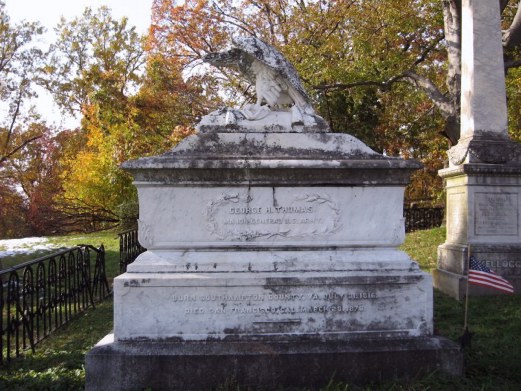 The focus of this project is the maintenance, repair and improvement of the General George Thomas Monument and Kellogg Family Plot located in Oakwood Cemetery. 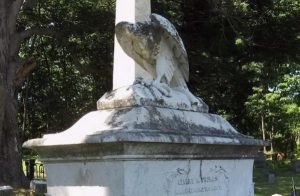 The Mission has four general goals. They are to assist in: [1] The regular maintenance and cleaning of the Thomas Monument and the Kellogg family markers; [2] Enhancing the Kellogg Family plot for easy recognition; [3] Helping to improve the condition of the plot and surrounding area in order to prevent damage to the monument and markers; [4] Fundraising to support each of the goals.

2012: Willard Camp was notified in an August 1, in letter from Mr. Bernie Vogel of the Troy Cemetery Association, Inc. (Oakwood Cemetery) that the trustees accepted our adoption of the Kellogg Family plot that holds General George Thomas and his monument. Several days prior to receiving that letter, Commander Albanese, Department of New York, issued Order #6 which recognized Willard Camp’s adoption of the gravesite in concert with the Department and encouraged support of the project. 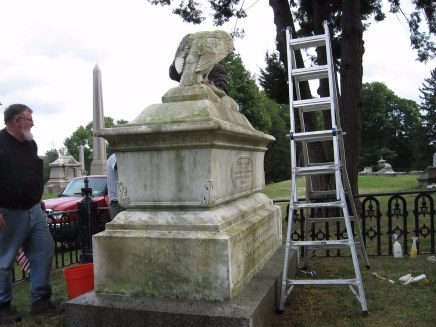 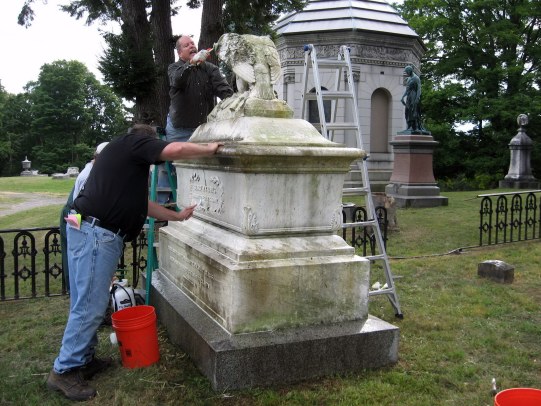 On September 8, 2012, Camp members assembled at Oakwood Cemetery in Troy, NY to kick off the General Thomas gravesite project. The Camp purchased two gallons of D/2 cleaner and was fortunate to retain the services of Mr. Joe Ferannini of Grave Stone Matters. Five brothers attended along with our faithful volunteer, Alysia Hamilton. In a few hours we were able to clean the entire monument and Alysia completed a significant amount of work on grave markers of various members of the Kellogg family. 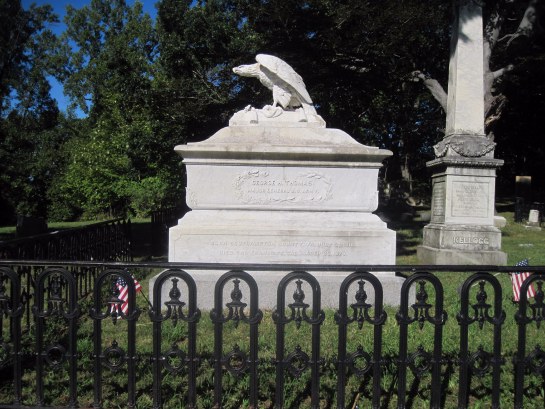 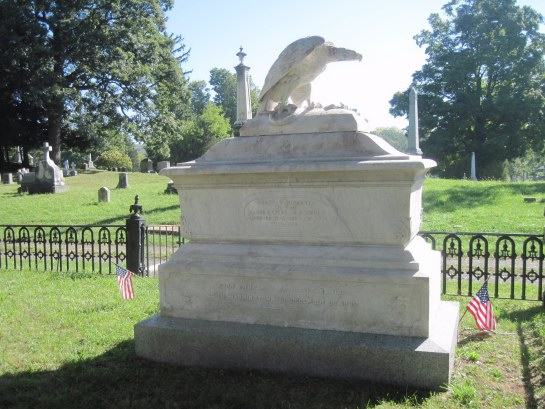 2013: Willard Camp, The Friends of Oakwood Cemetery and Oakwood Cemetery entered into a Memorandum of Understanding. It was revised in 2016 to be renewed automatically on an annual basis. Only changes to the agreement would require a meeting. 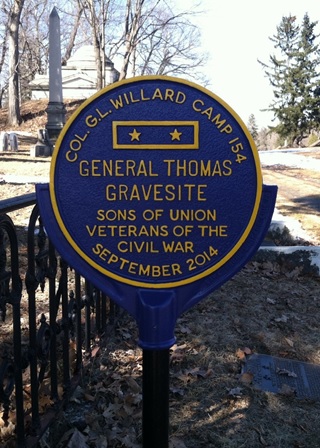 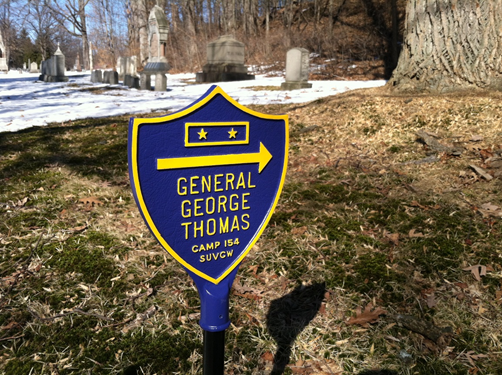 2014: All of the signs directing visitors to the grave site, and the sign at the grave site, were installed in the Fall. The signs arrived from the manufacturer in September. After Mr. Bernie Vogel, Oakwood Cemetery Administrator, determined their placement and Brother David Dziewulski toured the chosen locations, the staff at Oakwood Cemetery undertook the task of installing them. There were five signs directing visitors to the site and one at the grave site. For consistency in appearance they were designed to look like and have the same colors as the Uncle Sam signs in the cemetery. A dedication ceremony was planned in the Spring. 2015. 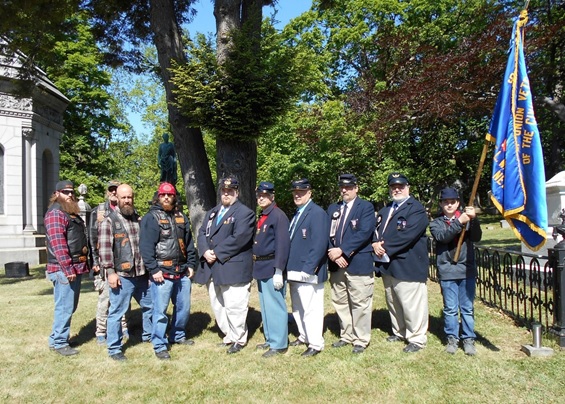 2015: On Saturday May 23, as part of the Memorial Day events at Oakwood Cemetery, the Camp, with the help of the Leatherneck Revolution Motorcycle Club (Marine veterans), dedicated the new signs directing visitors to the General Thomas gravesite on the Kellogg Family plot. The dedication took place immediately after the annual Wreath Laying Ceremony at Veterans’ Circle by the Friends of Oakwood Cemetery and the Veterans of Lansingburgh. 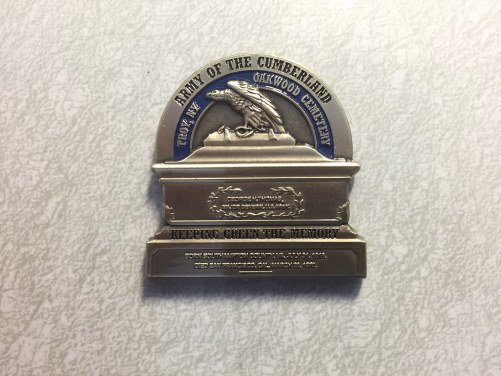 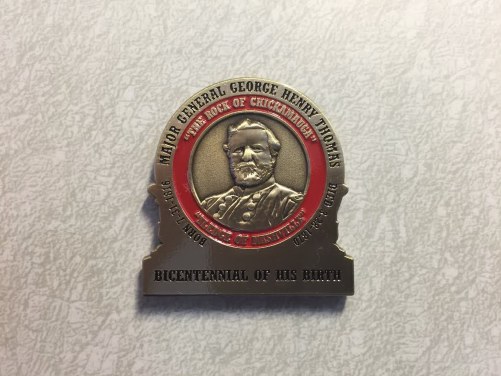 2016: A challenge coin was made available for fundraising purposes. The coin celebrated the bicentennial of General Thomas’ birth. It included his portrait on the front and his monument on the reverse. Net proceeds raised from the sale of the coin were used for funding the removal of a large Silver Beech tree that had. Falling branches from the tree ruined the wrought iron fence and threatened the monuments. 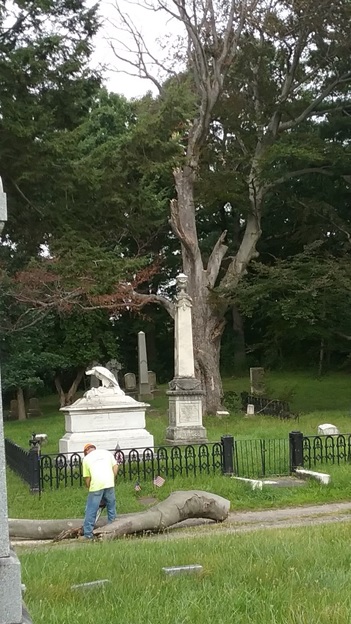 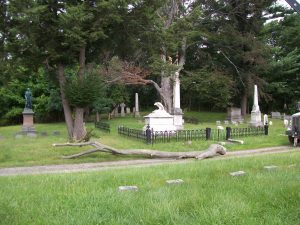 2017: The Camp received news from Oakwood Cemetery that the silver beech tree that threatened the fence and markers of the Kellogg Family plot was to be removed Friday August 11, 2017.

The Camp was proud of the monetary donation that helped pay about one-third of the cost for the removal of the silver beech tree. 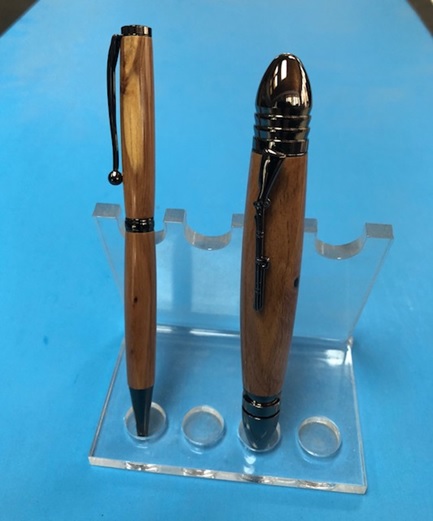 2018: The next fundraiser for the project was started in the winter of 2017-2018. Wood from the removal of the tree was fashioned into ballpoint pens for sale or auction. One pen is a simple slimline model and the other is a Civil War themed pen with component parts that include a musket and a revolver miniball. Labor costs were donated by Peneuf and metal components were donated by a brother in the Camp.

Visit Our Online Store to Purchase your own General Thomas Challenge Coin!

How You Can Help-Donate Here!

Your Donations go towards the Maintenance and Continued Cleaning of the Gen. George Thomas Gravesite-Monument Lot.

Send your Check payable to: “Friends of Oakwood Cemetery” 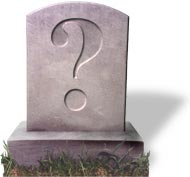