Primary Ancestor:
ROBERT H. BAILEY
GreatGreat Grandfather of Bro. Dennis F. Marr
Robert H. Bailey was born 17 April 1824 in Sand Lake, Rensselaer County, NY, the son of Warren Bailey and Jane Bugbee. He enlisted first 14 May 1861 in Co. F, 3rd NY Volunteer Infantry Regiment at Albany, NY. He received a medical discharge 14 August 1861 at Fort McHenry, MD. His medical discharge indicates “the loss of all his teeth and evidence of tubercular formation in the upper portion of the left lung.” On 21 November 1862, Robert re-enlisted in Co. I, NY 177th Volunteer Infantry Regiment (10th NY National Guard); his younger brother George enlisted in this unit at the same time. He was discharged 18 September 1863 at Albany, NY. His military records indicate that Robert stood 6′ 2 ½” tall.
Robert’s last appearance in the city directories is in the 1869 directory of Troy, occupation Laborer.
We do not know the date or location of Robert’s death or burial. 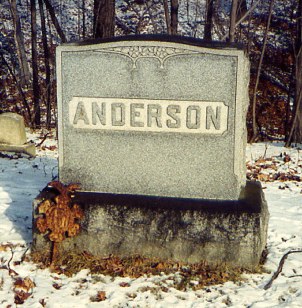 George Hamilton Anderson, Jr.
Albany Rural Cemetery, Menands, NY Anderson Plot
George was born 22 November 1843 in Albany, NY, the son of George Hamilton Anderson and Elizabeth Zeilman. He enlisted first at the age of 18 on 27 August 1861 in Co. H of the 18th NY Volunteer Infantry Regiment. He was discharged at Albany on 28 May 1863. He re-enlisted 29 December 1863 in Co. B of the 7th New York Heavy Artillery Regiment and was discharged on 15 June 1865 at Annapolis, MD. George received a pension for his service. The pension was based upon “partial disability due to being over age 62 years.” One of the deponents in George’s pension application is Charles H. Zeilman, his brother-in-law, who served as an officer with the 44th NY Infantry (Ellsworth Avengers). George’s pension file indicates that from February 1878 to May 1882 he resided in Kansas City, MO. George died on 28 March 1928 in Albany, NY and is buried in the large, 24-grave Anderson plot in Albany Rural Cemetery, Menands, NY. 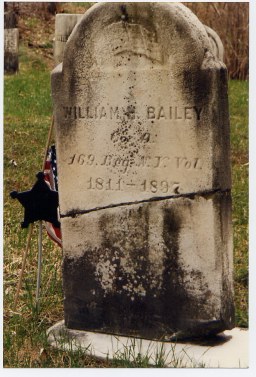 William Henry Bailey 1812-1897
Brainerd Cemetery, Nassau, NY
William Henry Bailey was born in Sand Lake, Rensselaer County, NY 29 July 1812, the second child of Warren Bailey and Jane Bugbee. William enlisted at age 50 in Co. A of the 169th NY Infantry Regiment. He lied about his age, stating that he was “only” 44! He signed up at his home town of Nassau, Rensselaer County, NY. In his pension application, he stated that he became ill with colds at Troy, NY and became even more sick at Staten Island, NY. Upon arrival at Washington, DC he was put into the Finley Hospital where he was treated by a neighbor, Dr. John H. Hayner of Brainard, Rensselaer County. On 18 February 1863, after his true age had become known,
he received a discharge; in this document he is described as “over age and broken down.”
In his application for a pension, he claims never to have been fit again for work. Numerous neighbors attest to a disgusting litany on intestinal ailments from which he suffered. He required a “keeper” to stay with him during the night. In his younger days, William was a farmer and harness maker, but later in life worked as a farm hand for others.
William died 24 May 1897, probably in Chatham, Columbia County, NY and is buried in the Brainard Cemetery on Route 20, Nassau, NY. 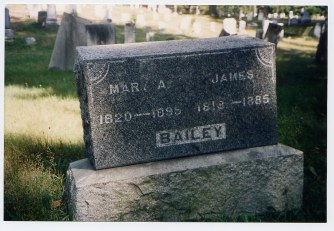 James Bailey 1818-1885
Sand Lake Union Cemetery, Sand Lake, NY
James Bailey was born 29 August 1818 in Woodstock, Franklin County, PA, a son of Warren Bailey and Jane Bugbee of Sand Lake, Rensselaer County, NY. James enlisted 27 August 1861 at Albany, NY in Co. B of the 3rd NY Infantry Regiment; James enlisted in the Regimental Band as a Musician Second Class. James was age 45 at the time he enlisted. He was discharged 12 August 1862 at Camp Arthur, Suffolk, VA. James died on 24 September 1899 in Albany; he is buried with his wife and his parents in Sand Lake Union Cemetery, Sand Lake, Rensselaer County, NY. 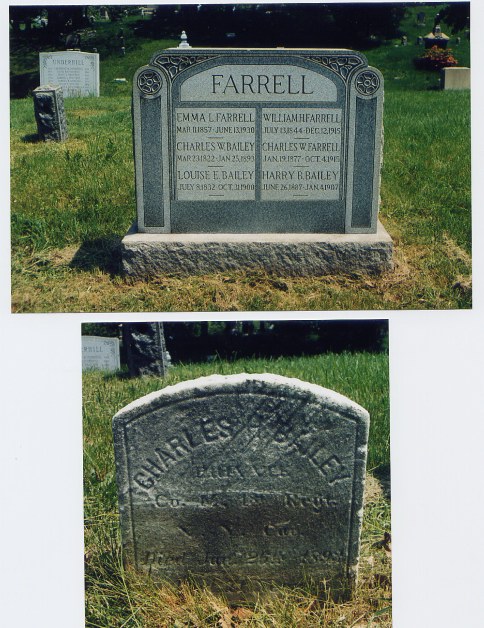 Charles Wesley Bailey 1822-1893
Cypress Hills Cemetery, Brooklyn, NY (Farrell plot)
Charles W. Bailey was born 23 May 1822 in Sand Lake, Rensselaer County, NY, a son of Warren Bailey and Jane Bugbee. In various records he is recorded as “Charles W.” and as “Charles H.” Charles enlisted on 7 September 1861 in the 1st NY (Lincoln) Cavalry Regiment at New York City. Some six weeks later, on 22 October 1861, Charles received a medical discharge based upon a diagnosis of tuberculosis; he was discharged at Camp Meigs, VA. Charles married Louisa Elnora Casey of Nassau, Rensselaer County, NY, a sister of Jane Eliza Bailey who married Charles’ brother Robert. They were married 14 November 1846 in Wynantskill, Rensselaer County, NY. They had three children: Julia, Emma L. and a son whose name is unknown. Louisa received a widow’s pension based upon Charles’ Civil War service.
Charles died in Brooklyn on 31 October 1900 and is buried there in Cypress Hills Cemetery in the Farrell plot.

Pvt. Samuel Hamilton Bailey
Great Great Grand Uncle
Samuel H. Bailey was born 15 April 1828 in the Town of Clyde, Wayne County, NY, to Warren Bailey and Jane Bugbee of Sand Lake, Rensselear County, NY. Samuel enlisted 13 August 1862 in Co. E of the NY 125th Volunteer Infantry Regiment at Troy, NY. Samuel was discharged 5 June 1863 in Virginia. Samuel received a veteran’s pension and Susan received a widow’s pension. In his application for pension, Samuel states that in the Fall of 1862 he contracted typhoid fever while stationed near Chicago, IL. Affidavits attesting to his medical condition at the time he applied for the pension state that his disabilities included asthma, loss of teeth, rheumatism, disease of the heart and general debility. In a subsequent declaration, Samuel added to this list disease of the rectum, kidney trouble and “bad head, the result of sunstroke.”
He died in Albany on 24 October 1904 and is buried with his wife in Capital City/Rensselaer Rural Cemetery, East Greenbush, Rensselaer County, NY. 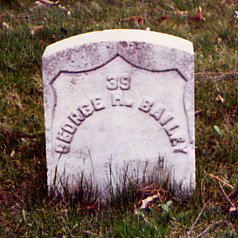 George R. Bailey 1834-1863
Albany Rural Cemetery, Menands, NY Civil War Soldiers’ Plot
George R. Bailey was born 9 June 1834 in Sand Lake, Rensselaer County, NY, a son of Warren Bailey and Jane Bugbee. George enlisted at Albany, NY with his brother Robert on 22 October 1862 in Co. I of the NY 177th Infantry Regiment. George died 21 March 1863 of typhoid fever at Bonnet Carre, St. John the Baptist Parish, LA. George was buried in Louisiana, along with many other members of his regiment. In December 1863 George’s remains were brought back to Albany along with those of many of his comrades and buried in the “new cemetery” (Albany Rural). (Albany Evening Journal article 30 Dec 1863: “The Dead of the One Hundred and Seventy Seventh/35 Bodies Ungraved – Arrival of Capt. M.L. Filkins.”). The text of this article is worth quoting:
“The Dead of the One Hundred and Seventy-Seventh

From the New York Daily Times

Pvt. John Dwyer
Great Grand Uncle
Ca. 1845 – 4 January 1897
John enlisted as a Private in Company I of the 104th NY Volunteer Infantry Regiment on 28 January 1862 and was mustered out at Petersburg, VA on 8 March 1865. John had a number of absences without leave, the last of which he was fined $5 of his monthly pay for 2 months. At various times he was attached to the PA Light Artillery, ME light artillery and NY Light Artillery. He was captured at Gettysburg and confined at Richmond, VA before being paroled. Captured at Weldon Railroad, VA, confined at Richmond and paroled at Vienna. He was treated at various times for Typhoid Fever, Acute Diarrhea, Catarrh and Malarial Fever. He married a girl from Alabama and was living in Mississippi when he applied for his pension, which was initially declined. He died in Troy, NY and his brother Philip obtained Guardianship of John’s minor children and collected a pension on their behalf. John died in Troy and is buried in St. Joseph’s RC Cemetery there. 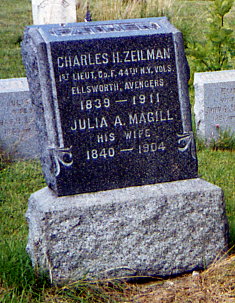 Capt. Charles H. Zeilman 1839-1911
Albany Rural Cemetery, Menands, NY
Charles H. Zeilman was born 25 September 1839 in Albany, NY, the last child of John Anthony Zeilman and Elizabeth Luther. Charles was the brother of Elizabeth Zeilman of Albany who married George Hamilton Anderson, father of Brother Marr’s ancestor George Hamilton Anderson, Jr. Charles enlisted at Albany, NY on 8 August 1861 in Co. F, NY 44th Infantry Regiment (Ellsworth Avengers). He enlisted as a Private for three years and was successively promoted to First Sergeant, 2nd Lieutenant and 1st Lieutenant. Charles was brevetted Captain, but declined the commission. He commanded Co. F of the 44th Regiment from the Peninsula Campaign until he was mustered out. He was discharged at Albany, NY on 11 October 1864. Charles was wounded in action twice: he was severely shot in the side at the Battle of Gettysburg and was later slightly injured at the Battle of the Wilderness.
From a report in his pension file, we know that in May of 1904, Charles stood 6’2″ tall and weighed 229 pounds.
Charles died in Albany on 29 April 1911 and is buried in Albany Rural Cemetery in Menands, NY.
Charles H. Zeilman is a qualifying ancestor in the Military Order of the Loyal Legion of the United States
(Member #22061: Dennis F.M. Marr, collateral).