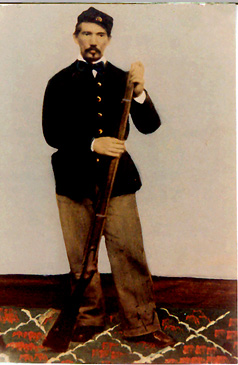 Charles Horn was born in Germersheim, on the Rhine, in Germany, on
April 8, 1839. At the age of fifteen he learned the stone mason trade
and in 1859 he came to the United States, landing in New York in June.
On September 9, 1861, he enlisted in the Forty Fifth New York Volunteers
under General Sigel and served for four years and four months. Mr. Horn
was a man of courage, which he displayed on many a hard contested field.
At the battle of Gettysburg July 1, 1863, he was shot through the leg
and also had an eye put out by a fragment of shell. He lay in this
distressed condition on the field for two days before rescuing parties
found him. For five months he languished in the hospital in Germantown,
PA, before being able to again join his command. Then he served under
General Hooker at Lookout Mountain, TN. And also at Resaca as well as
many other conflicts. On October 1, 1865, Pvt. Horn was honorably
discharged and returned to his home in Brooklyn, New York. 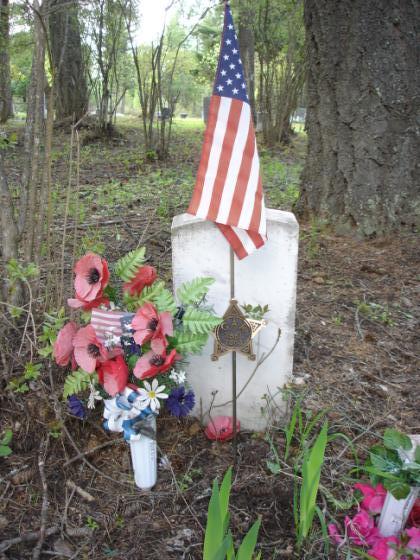 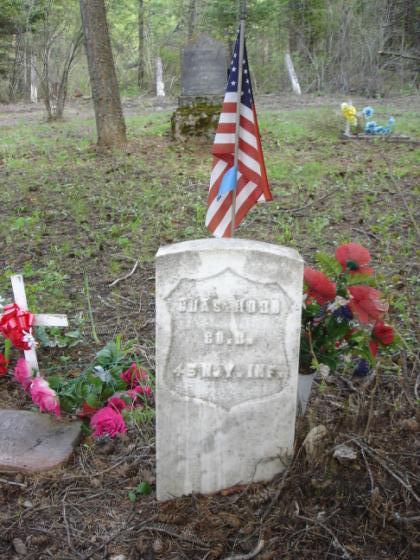 On November 5, 1865, Mr. Horn married Theodora Gertum. To this couple were born four boys and three girls. Which my G-Grandmother Josephine Horn Tanner (1881-1960) was one. Mr. Horn and his family lived in Chicago, many cities in Minnesota, Richmond, VA, Baltimore, MD, several towns in Texas, St. Louis, MO, following his trade in each place. Finally in 1893, they moved to Valley, Idaho where he handled a farm until his death on February 5, 1905.

(Buried at Seneacquoteen Cemetery) Mr. Horn was a member of the G.A.R., Charter member of the F.O.A., at Priest River. He and his family were affiliated with the Catholic church and were respected people and substantial citizens of this county.